A Rattle in the Rocks 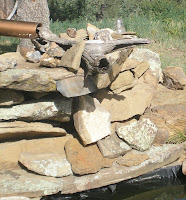 One evening my husband and I were sitting on the back deck when we heard a heart-stopping rattle and jumped up to investigate. One of our cats had its paw stuck in a gap of the rock fountain, trying to capture a rattlesnake. I grabbed the cat, Gary grabbed the shovel. Our dog, Smokey ran up, bellyaching as only a Malamute can. He hates snakes. Gary poked and prodded at the hole for twenty minutes but the snake wouldn’t budge. Frustrated, we stuck a hose in the gap and tried flushing it out, but that didn’t work either. Half an hour later we hit on an idea. We splashed charcoal lighter around one side of the gap and lit it on fire. Sure enough the rattler crawled out the other side and Gary chopped its head off with the shovel.
Once humans, cats, and dogs were all safe, the adrenalin ebbed from my limbs I started to feel bad for the snake. It thought it had found a cool place to nap, hidden from predators. I remembered a reading I’d attended a few months earlier by Leslie Marmon Silko, one of my favorite authors. She described her home outside of Tucson. On the patio she has a long row of pots that she waters by hand. The morning had been cool with a promise of blazing afternoon heat and she had gone up and down the row several times with the hose. She was making her way back to the house when she looked down. Between two pots, curled up in the shade, inches from her bare foot was a rattlesnake. It must have been there the entire time she’d been watering.
She let it be.
I think she was able to do that because she trusted that the snake knew she wasn’t a threat or food. I know that both were true. Yet when faced with a rattler my reaction was a murderous one and if it happens tomorrow it will probably be the same. I have no more trust in the natural world than in the human one. I suspect that just as there are a few but significant number of stupid and paranoid people, I may run into a stupid snake that doesn’t realize I’m too big too eat or a paranoid one that sees everything as a threat. I would love to have Silko’s trust and relationship with nature, but it seems risky to me. I remember Treadwell, the guy in Alaska who loved and lived with bears. Until they turned on him. Maybe he just picked the wrong bears to trust. I’ve done that with people before.
I wonder how many of us are truly comfortable with nature.
How comfortable?
Posted by Unknown